Last Weekend me and my Partner decided to stay for a night at one of our favourite Country House Hotels ( this makes me sound like I’m visiting country houses every week – trust me, I’m not!)… Which also just so happens to be where my father works as the Head (only) Gardener, 15 acres which in it’s day as a stately home had a total of 12 Gardeners. A sad and clear sign of the times. And hard work indeed for my Dad.

We stay there quite regularly actually, as since my partner also works at the hotel, albeit in a separate building in the grounds, we get a good discount, which includes bed and breakfast (I’ll stop gloating in a minute but those breakfasts are glorious) …We’d be mad not take it up. The people who own it also own quite a few others dotted around the country which we can stay at for the same amazing discounted rate, so we do try to get a way for a little break somewhere every now and then.(I’m now making myself sound like a cheapskate… trust me, I’m not… okay yes maybe a little. I prefer the term Bargain-Hunter )

When we visit, we always do a walk of the grounds, which consists of Formal Gardens, lawns and woodland, just to see what changes have been made since we last visited.

This time however we had been set a bit of a mission. He is wanting to set up a clear, sign posted trail that guests can follow through the gardens and woodland, and before we left he give us a set of directions to follow, just to see if it would work.

So unpacking our stuff, and Being lured out by the glorious afternoon sun: 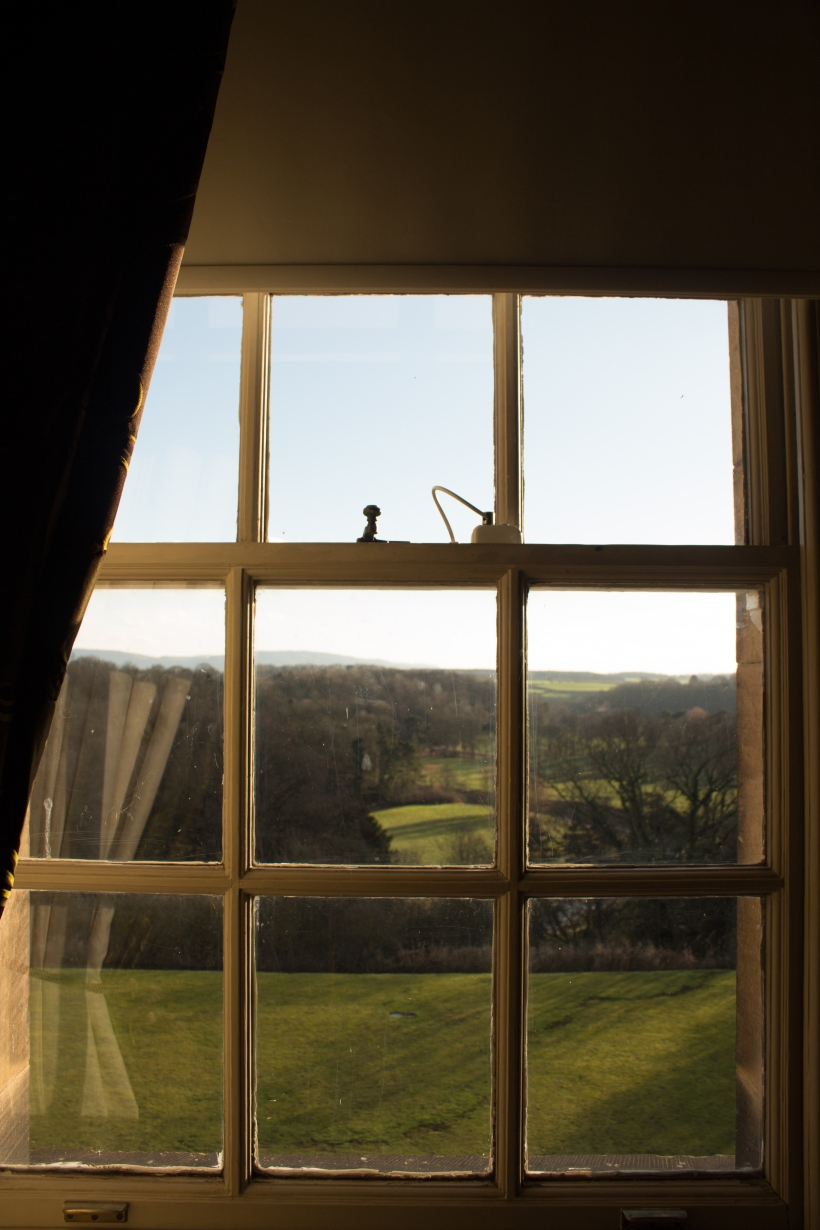 From leaving the Main House, you’ll see the Front formal lawn, known as ‘the glade’ which within a couple of weeks will be fully striped:

left from here is this door, which I had to admit is very alluring.

However we had been instructed to go right and into the woodland in the distance. Entering the woods, the signs of winter were still here, the ground still quite boggy:

But there were also sure signs of spring, with snowdrops out, and other spring plants following behind. 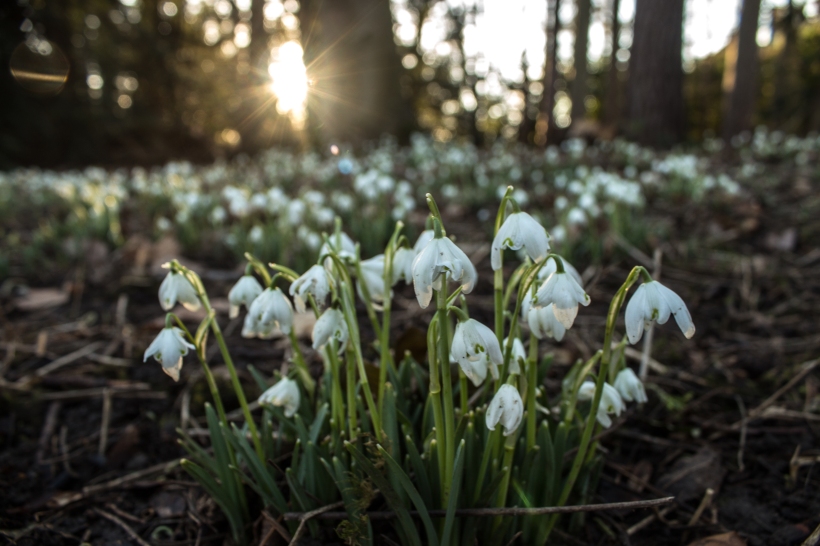 Until, after admiring snowdrops and log features, and bits of topiary, you reach an opening:

And up some steps, a glimpse of the house.

Up the steps and to your left, you’ll see the Main Lawn:

And to your right, an enclosed area: Which if you enter you’ll find the sunken garden, which has recently been redeveloped into a Rose Garden: 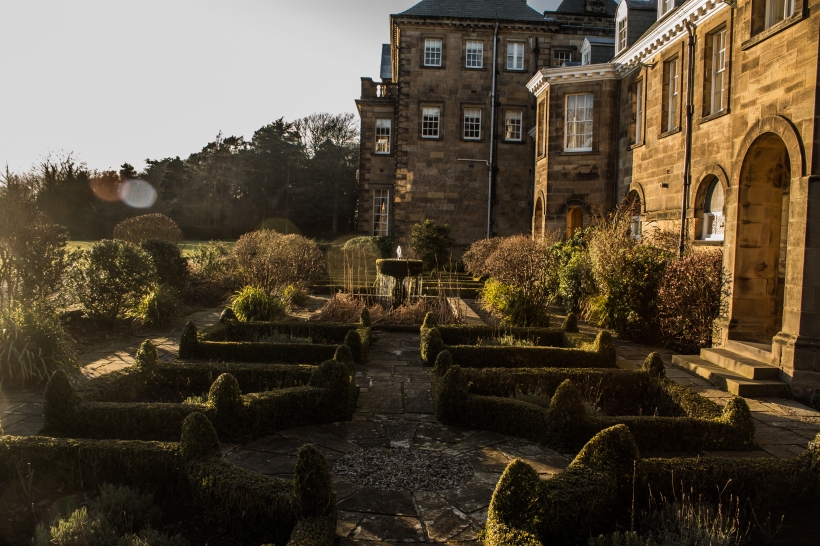 I’m really looking forward to seeing this establish as it’s just going into it’s second year in it’s current form so I will certainly be back in the summer to see how it’s going.

Back on the path you pass another bench,which offers glorious views over the formal lawn and house:

We’ll continue past this bench and reach a Yew hedge, behind which is another path leading us back into the woods: where again there a clear signs of spring.

This is the first time I’ve actually been down this path as I’ve never known it was here, I guess part of the reason my dad wants to sign Post. 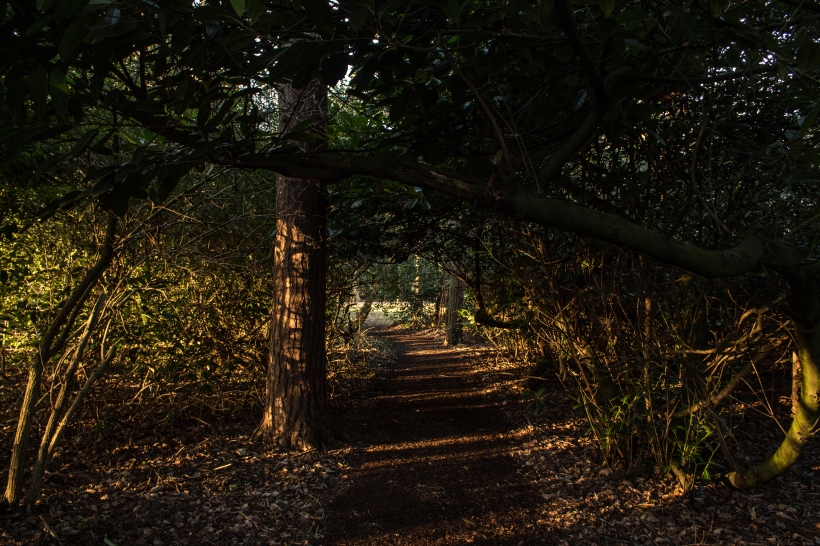 Following on we reach the main drive where we had been instructed to cross over to another part of the grounds I had not visited before.

From here there are fantastic views of the estate.

These fields have a few fallen trees which are protected so cannot be removed, instead they are left to break down naturally. But I don’t mind that. They’re not an eye saw, sad to see them fallen though. But a habitat for something else.

Further down the footpath, we reach another opening: 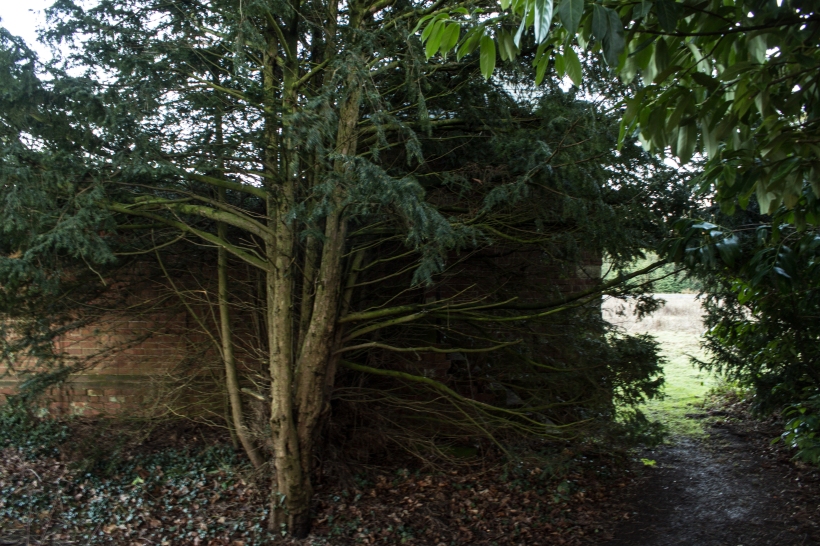 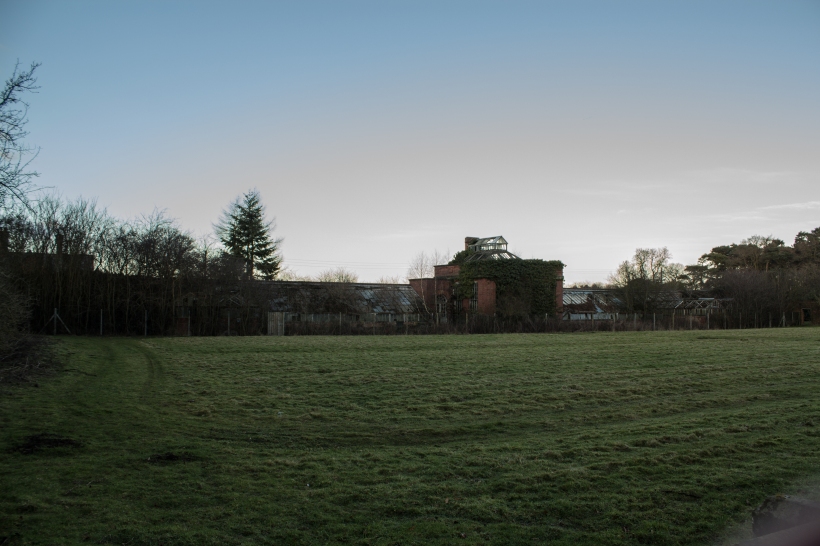 This was lost many years ago, the reason to which I am still unsure but I’m desperate to find out ( Long before my father arrived – my best guess is after the Second World War when large country estates like this really started to decline.) It would take a lot of money (and a lot more gardening staff) to get going again; even more if they were to redevelop the old Greenhouses and Orangery:

which is in an even further state of disrepair… very sad because you can see what marvellous constructions they once where. One day I hope they will be fully restored. But Sadly I doubt it.

Nature has reclaimed them: 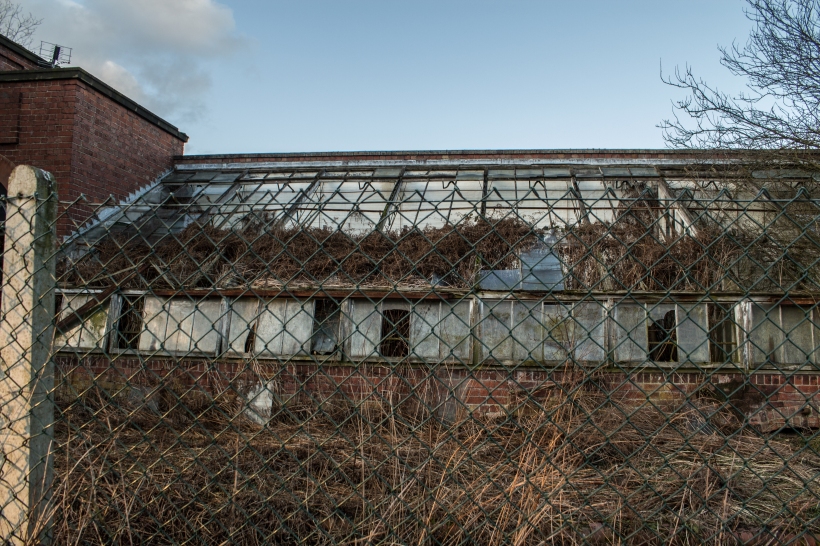 Here you can see trees growing from the inside.

Behind this fence there are still working Beehives, which are kept by a local bee-keeper.

Leaving here, through another enticing door, you’ll reach the orchard: 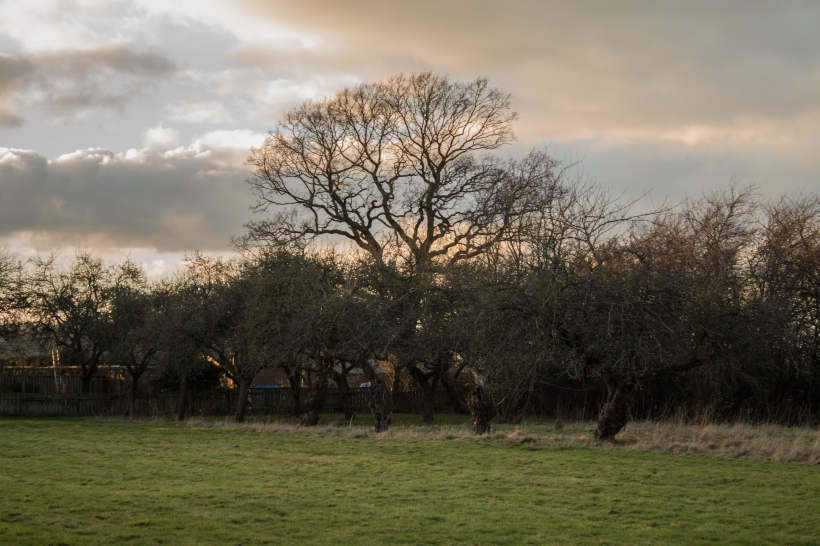 Opposite the orchard is an old converted set of stables, which hosts 2 out of 3 of my dads Sheds.

Continuing on you’ll pass ( but not enter) a little yard which plays host to the compost bins and piles… which quickly fill up in Autumn when the leaves begin to fall.

Down this back track , and through the trees, you’ll see the end of the first formal lawn we passed:

The end of this track and back where we started, would conclude the trail, which I think is going to be very successful. 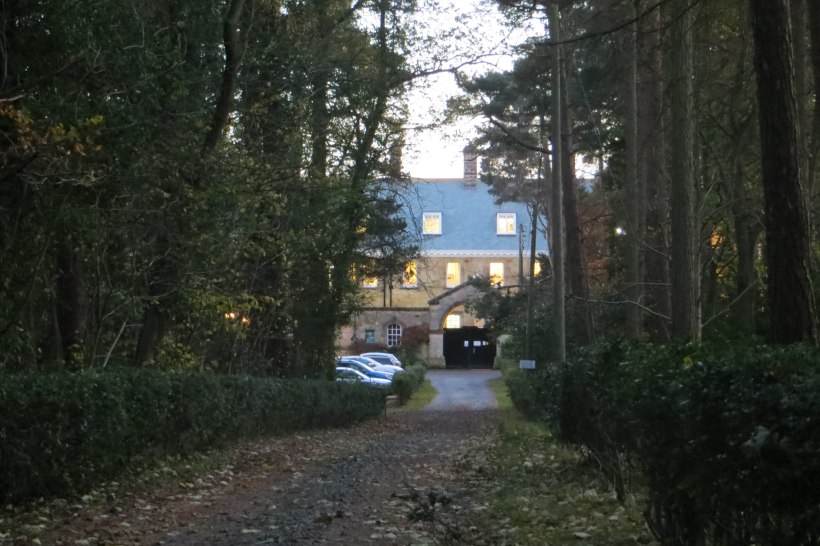 However there is one more area I’d like to show you: a little hidden Gem.

Five stepping stones, only noticed by the most observant eye, mark the entrance. 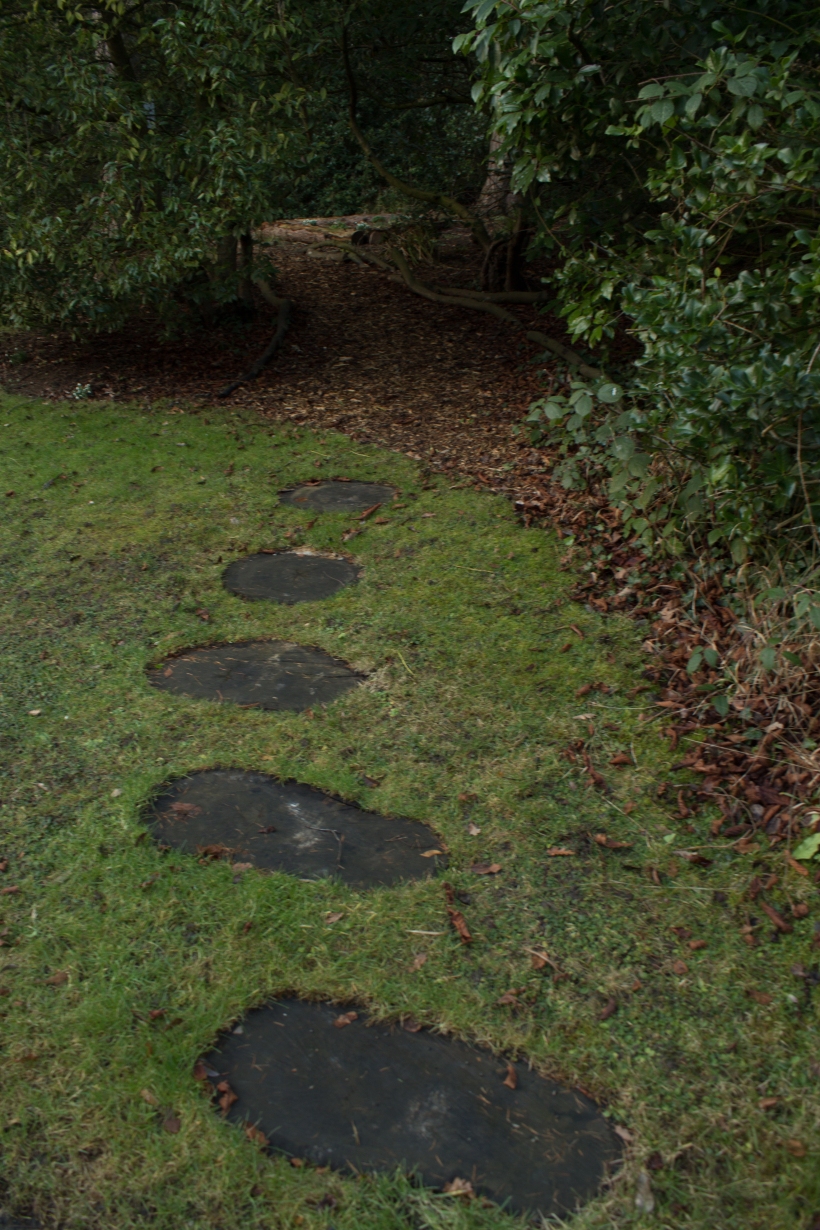 And past a little spring planter, 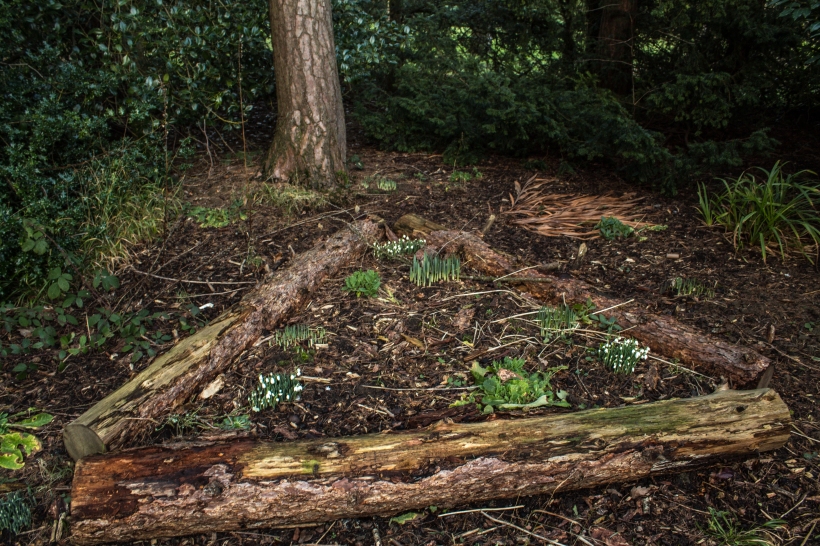 This area was installed 2 years ago. This bit is meant for the wildlife not the guests: although there is a bench if you happen to find it.

It’s quite peaceful, to just sit listen and watch for a bit. Normally I bring some food up for the birds but sadly it slipped my mind this time, but it does play host to a lot of garden birds, as seen in this video ( apologies for poor quality).

And in these Pictures:

Last year, in one of the boxes on the trees, they had Tawny Owl Chicks for the first time.

One of which, by absolute chance, once landed on a branch right next to where my Dad was working:

How I wish I Had seen that! But we do hear the owls on the night whenever we stay, and it is a haunting , Beautiful sound.

On the day after this visit, after the glorious breakfast in bed, we decided to make use of our new National Trust Membership, and visited Fountains Abbey, and Studley Royal Deer Park, which was equally beautiful (If 10 times the size). I could carry on and show you photos from that walk. But we’d be here for weeks. So I’ll just reccomend that you visit and leave you with this:

Overall it was a fantastic Weekend.

...Collected swarm being transferred into Dads hand made Topbar beehive. 28.05.2020
Dicksonia antarctica with Matteuccia struthiopteris in the valley today; the calm before the storm of a swarming beehive! 28.05.2020
Papaver orientale, grew from seed 3 years ago. 27.05.2020
Box, Beech and Euphorbia blending perfectly into the wider landscape.